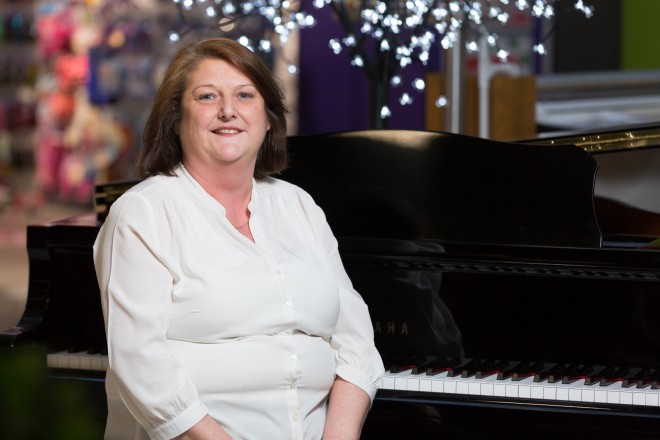 She’s the lovely lady who never stops.  ‘I just love working at Broderick’s and meeting so many new people, every day.’ Eileen’s not kidding: the numbers at T2 are amazing. There are 80 check-in desks, 15 pier-served aircraft stands; 14 air bridges and 5 baggage reclaim belts, together handling approximately 54,000 pieces of luggage every day and the T2 baggage system is an amazing 4 kilometers in length.

So there’s never a dull moment. With so many faces passing through every day, you wouldn’t think there’d be any chance of building relationships with customers. But then, you don’t know our Eileen…’Believe me when I say we have regulars’, she says. ‘We have a huge number of people who come back to see us trip after trip and that’s when the real banter begins. We have so much fun that half the time it doesn’t feel like working at all!

Best day? ‘I’ve  had that many I could write a book’, Eileen says, ‘but as you know, if you play can instrument and you’re prepared to entertain our customers we’ll feed and water you in return. Which is fine, until one day day a choir of 22 people turned up! It was an amazing sound and an amazing sight – almost as amazing as Mr. Broderick’s face when I told him how much they’d all enjoyed the bacon butties and coffee!

Funniest moment?  ‘Oh, I wish you hadn’t asked me that’, Eileen laughs. ‘I once mistook a group of Japanese tourists for the Chilean miners that’d just been rescued! I rang Mr. Broderick to tell him they were overwhelmed by our hospitality and that they’d loved the freebies. It was only after he took the camera to put the pictures on the web site that Mr. Broderick realised the ‘miners’ were in fact Japanese football fans, with iPads and apple phones – not the rescued Chileans…’

The perks of the job.

We see a lot of well-known faces passing through Broderick’s at T2, but Eileen’s in no doubt as to the most famous person she’s ever served. ‘David Beckham’, she says without hesitation. ‘Although I’m a blue, I must say he was absolutely charming, he had his picture taken with my son. We see Paul Scholes quite a lot. He has a lovely family and I’ve met Peter Kay and countless soap stars and footballers.’

As for the ‘best artiste’ to have graced the piano at Broderick’s at T2, that’s a trickier question. ‘Wow’, Eileen says. ‘There are so many of them passing through on tour. I think Matt Breen and the singing policeman with the sub-machine gun belting out Oasis was amazing (you can see it again here) and I’m not surprised it had 1.7 million hits on the Internet. The way it happened was amazing. For some reason, Matt had been dropped-off 3 hours before his flight, so he treated us to his entire show.’

Busy is best for Eileen. She says her favourite days at work are when ‘the team’s on song’ and there’s a promotion on. ‘National Bacon Butty Day’, she says with a smile, ‘that’s the best of the lot.’

Not that she has time to enjoy one…

Did you know that in the UK, we drink 98 million cups of coffee a day?☕️ #TuesdayThoughts https://t.co/UnNIVeT47v