Home   | Blog   | Broderick’s Charity Boost For The Bike Boys Of ‘Vending Does’.

Home   | Blog   | Broderick’s Charity Boost For The Bike Boys Of ‘Vending Does’. 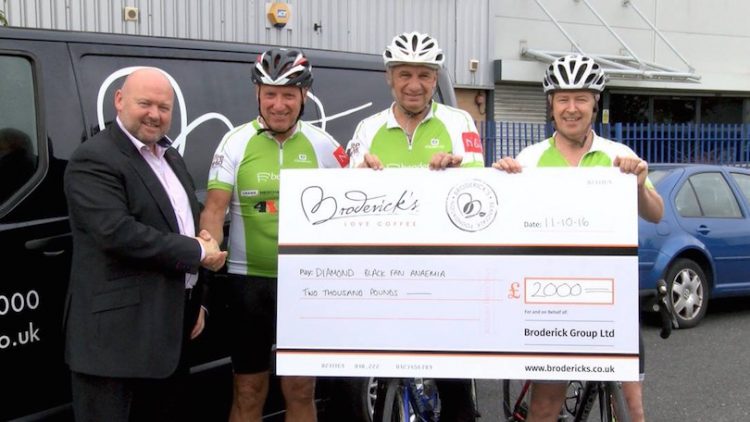 You may remember that, back in September, the ‘Vending Does’ cycling team rode into Vilamoura in time for the AVA conference and in so doing, they raised £3,000 for the Diamond Blackfan Amaemia charity, (DBA)

It has now emerged that Broderick’s boosted the charity total by a further £2,000.

Roger Bunn is delighted. ‘The vending community is famously supportive of good causes and DBA is a cause that’s particularly close to our hearts, as we’ve seen first-hand the effect it has on families.  We’re extremely grateful to the Broderick’s for their particularly generous donation.’

Broderick’s is no stranger to charity work, from Macmillan Cancer Support to Children in Need. The company also sponsors local sports teams, donates to food banks; provides a prize fund for ethical gardens and digs deep to support the charity auction for EdUKaid.

‘The Vending Does team really did sacrifice blood, sweat and tears to overcome an extremely demanding challenge’, Johnny Broderick told PV.  ‘Not only did they cycle 300 miles, but they climbed 17,000 feet in the process. I take my hat off to them. We’re delighted to have supported such a great cause.’